As you read this I’m packing (more on that sort of thing further down) and getting ready to join a cross-party delegation visit to Israel and Palestine. I’m particularly keen to explore the potential role of the European Union and its institutions, in helping to find a way forward for Palestinians and the Israeli people. I’ll write more about this when I return. Also very much on my mind this week, has been the awful news from near Blackpool, where Cuadrilla have triggered more fracking-induced seismic events, including a 1.6ML that some residents felt. The worry and stress that the community has gone through since the first shale gas operation and earthquakes there in 2011, is just awful and seems never-ending.

Ahead of my trip, I’ve written to various groups and individuals that I thought might find the feedback from the trip of interest.  I’m delighted to have received responses from bishops in the region. You can read more about the delegation visit here and I will be posting fully about my visit upon my return.

Thank you so much to Geraldine Coggins, Trafford Green Lead Councillor for speaking my words to the rally. I wish I could have been there

I am really sorry that I cannot be with you in person on this important anniversary, commemorating the horrific and senseless slaughter of men, women and children, protesting peacefully for their right to vote 200 years ago. The day of the Peterloo Massacre was a key event at the beginning of a slow victory for the reform of our voting system.

But today’s celebrations must highlight that the fight is not over and we have a long way to go, and indeed we have to fight right now to keep the democracy we have won so far.

It is no coincidence that those who seek to undermine democracy and human rights protections are so often also of the self same group that is promoting climate change denial and who seek to prevent action to deal with the climate crisis.

Today we have to fight for two major reforms.

One is to change our first past the post voting system to proportional representation.

The first past the post electoral system has disenfranchised a huge section of the electorate. The British adversarial political system is incapable to find solutions to the most important issues we are facing as a nation: the climate crisis; the inequality born out of austerity politics and the sense of disempowerment that lead people to vote for Brexit three years ago.

Proportional representation allows for respectful cross-party working to tackle the climate and ecological emergencies, and listen to available solutions, like the Green New Deal.

The Green New Deal demands a wholesale transformation of our systems of production, consumption, and social relations – rewiring our systems ensuring: recycling, reuse, repair and care are central. This means a circular economy that empowers citizens and their communities, raises the standard of living, guarantees decent jobs and recognises that housework, childcare and care for the elderly are recognised and rewarded, but also that activities which contribute to the regeneration of our natural systems play a central role in our economy.

I was delighted to be voted into the European Parliament as the first Green North West MEP – which of course uses a form of Proportional representation. The UK is about the only country in Europe -indeed among any democracies that uses first-past-the-post in its general elections.

Across Europe and in the European Union those recent European elections are now referred to as the climate elections, when voters demanded that politicians put the climate crisis at the forefront of their minds.

It is now crystal clear since the referendum that we urgently need new reforms to control the use of personalised information on the web for all future elections. We must now urgently review rules about elections campaigning to address fairness and accuracy of information, to close electoral law loopholes created by our dependence on the web. We cannot allow rich individuals, organisations or other states to exploit people’s fears, personal data, interfere in our elections through data mining and spread lies without any transparency and controls.

But there are reasons to be optimistic. Those people boldly involved in Extinction Rebellion and the Youth Climate Strikers are now part of the vanguard of a new peaceful democratic movement and they need to be listened to! Citizens are taking to the streets here in the UK and across the world in a sign that patience is running out with outdated systems that are not geared to meet the needs of our people and the demands we have for change.

You are all here because you care about the future. I am with you in spirit today and all the way on our continuing fight for real democracy.

One of the wonderful perks for MEPs – if I could only find the time to avail myself of it –  is that we are encouraged, in as much a budget is available for lessons or packages, to learn new or refresh other languages. I haven’t actually opened the email with what’s available yet!

My trips to Brussels have allowed me to practice my s’il vous plaits and remember a few unexpected words plus learn ones I never knew: gaspiller = waste!

I was once almost fluent, although I didn’t do more than ‘O’ Level French at school.

While my mum was a school secretary in a primary school in Clapham, south London, she became friendly with a new mother from France, who had a friend near Orleans with a daughter looking for a pen-friend. It was arranged that I should have my first visit to Sabine in her very rural tiny village and off I went after only four or five practice letters.

A big question – as it would be for most 14-year-old girls at the time – what to wear? My mum was a tailor and I was an only child. I had three older girl cousins whose hand-me-downs I loved because I thought they were all so cool. In short, I had loads and loads of clothes and in the absence of knowing what might be appropriate for life in a French village… I took 70% of my whole wardrobe for that first 10-day stay in an enormous grey suitcase that was almost too heavy to lift.

I was un peu embarraseé to say the least. I learned then that less is sometimes more; that the French really do have style, that girls in rural France were not obsessed with clothes! But Sabine and I developed a good friendship that lasted a number of years and I got to be almost fluent. It would be such a ‘domage’ not to improve again.

Got some time away with family ahead of the next working-trip – although the ability to ‘relax’ and just let go of all the thoughts about what’s going on, is near impossible!

I have campaigned to ban fracking alongside residents not just here in the North West, but across the country: it’s a dangerous practice and yet another fossil fuel we can’t afford to burn even if they do get the gas out. Reading the updates of seismic activity on the British Geological Society page specifically for seismic activity caused by human activity (!) was sickening – update after update as the events kept happening. Yes, they’re small, mostly not ‘felt’ events but back in 2011 and the first of the fracking-induced earthquakes, the tremor did indeed damage a well and there’s every reason to be concerned about a repeat event.

Last night’s 2.23ML earthquake (according to Cuadrilla, but the BGS state 2.21ML) has caused great worry and unease across Blackpool and the Fylde, with hundreds of reports that the quake was both felt and heard, with some people reporting property damage. Campaign group, Frack Free Lancashire, have called for an “urgent reconsideration of a fracking moratorium” and I completely back this call. The fracking industry is neither wanted nor needed in Lancashire or anywhere.

In Brazil and its surrounds, the Amazon rainforest is burning. It is heavily ablaze and it is no natural disaster: it has been done on purpose.

“We are literally burning the lungs of our planet.”

“The stakes couldn’t be higher. The burning of the Amazon places the planet on red alert. This is a globally significant eco-system and carbon sink, vital in the fight against climate breakdown. If we lose it, our planet and civilization face meltdown.

“Bolsonaro is encouraging this torching of the forest to appease his agricultural paymasters so they can use the land for beef cattle and soya. He is guilty of ecocide and politicians across the globe must stand up to this environmental criminal.”

Aside from the awful updates about seismic events and the condescending response to residents’ concerns by the industry, I could see where the power, wisdom and determination was coming from and that’s the incredible community who have protested at the site since January 2017: events planning, press releases, freedom of information requests and freshly-made charts and diagrams filled up social media timelines and the press. There is no stopping a community that’s fighting for the health and well-being of their families and until fracking is gone, the protests will continue.

A plea to all UK employers. If people can't work for any reason - furlough em. It's not cheating the system, it's upholding it...

And @RishiSunak please RT your agreement. 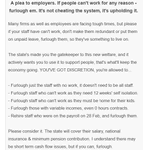