Tuesday 21st January – Gina hosting a visit & workshop to EU Parliament in Brussels for a delegation of students from Manchester Metropolitan University’s EU-funded Hyschools project, along with Green/Remain guests.

Tuesday 29thOctober – Gina will launch a Green New Deal for the North West report in Manchester.

Saturday 12th October – Gina will be the key speaker at the Faith in the Environment Seminar, organised by the British Muslim Heritage Centre

Friday 27th September – Keswick. Gina will join a cross-party panel after a screening of the film Age of Stupid.

Monday 12th– The second anniversary of ‘Green Mondays’ at Preston New Road fracking site, from 10:30-13:00. The site is between Blackpool and Preston on the A583, PR4 3PE. Event link here.

@SadiqKhan You keep saying that. I do not think the Mayor election works the way you think it does.

This election is different so Londoners can vote without risk.

By voting #SianBeforeKhan you can back the candidate that you like most (@SianBerry), and still choose a backup for round 2. 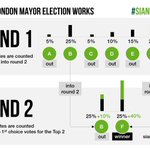